There was an article published on the French magazine: Le Girafon Federe.
The online version can be found at:
http://www.monocycle.info/data/documents/girafon/girafon_federe_3.pdf

The article about unicycling in Puerto Rico can be found on pages: 18-21 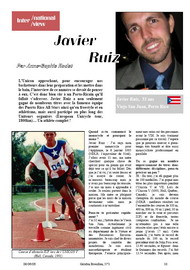 The translation* of the article is as folow:
*Literal translation using Google.


When did you start the
unicycling and why
mono?
Javier Ruiz: I received my
first unicycle for
Epiphany, January 6, 1985
(Note: the equivalent of Christmas).
I would have 11 years, my mother
looking for something
special for a kid who had
already everything he needed. from
I saw him, I jumped on it and
I tried to roll. I was enjoying myself a lot
did not have much success.
It took me a month to learn
roll. I drove around the
House. My mother complained
because the walls of the house
but I became dirty
continued to train.

Can you introduce yourself quickly
is lying ?
I'm 32, I live in Old
San Juan. currently I
works as a civil engineer
the Department of Nature and
Environ Resources
tal. I am head of various
control projects
flooding. I am also
massage therapist and student
therapist. I work mainly
ing myself on people
with HIV. I hope
I could practice full-
time soon and be as
professional rider in
parallel

You have a number
impressive titles in
different disciplines, can you
elaborate a little?
JR: Well, I had to earn more
100 medals. I won my
the most important titles at
Unicon the V and VII. During
the Unicon V (1991, Hull, Quebec,
Canada), I became
Racing world champion
(Note: better managed
all 100 m races,
400 m, 800 m, 50 m 1 foot, 30 m
wheel walk and journey
IUF) and freestyle, all
categories. I do not
not expected such
success while I was still so
young (I was 17). This
year, I broke the 100m
World Record.
It was held by John Foss with
13.60 seconds and appeared in
the Guinness Book of Records. I did
it in13.54 seconds.
Shortly after, my
record was beaten by Peter Rosendal, but
without following the IUF standards (Fédération
International).
When Unicon VII (1994,
Minneapolis, Minnesota,
United States), I
again became the racing world champion. That same year, I also
participated in the US championships.
Between US championships and
the Unicon, I won more than 30 medals
that year (and most gold).


You also traveled through
unicycle ...
JR: First, I started traveling
to go to Unicons. I went to my
first Unicon in 1986. In 1997, when
I finished my university studies,
I had no work and decided to travel.
I contacted friends from various countries
Europe and some of them were
ready to welcome me (in their homes). I spent 5 weeks
Holland, Germany, Switzerland, France
and Spain. During this trip, I
particpated in a unicycle tournament
near Frankfurt and
in Eurocycle near
Geneva, Switzerland. I encourage everyone to
take this opportunity we
have, as Unicyclists, to be
invited to stay with other
unicycling. I also myself
Unicyclists hosted in Puerto Rico.

... You even participated in the EUT
(European Unicycle Tour) rode 1800 km in 21 days.
In 2001, I was bored in my job,
and I needed to change my
life. I was invited to participate in the
EUT, but I thought I could
not. Do
I have no time?
Money? Fitness (physical shape)?
Finally, I did. While I
I was training for the EUT, I was laid off,
so I found time and money.
Just before the turn, I managed to
Eurocyle go to Plymouth,
England. I was offered to be a
guest of honor at World Games
Akita, Japan. After these, I made
visit various unicycle clubs
Japan, I did most of the trip with
Julien Monney. I was then offered
to go to Australia,
where I
visited several (unicycling) clubs.

Do you practice with a club?
JR: There is a club in Isabela, a town
West of Puerto Rico. It's our
main club. It is two hours drive
from my house. They have been unicycling for about
35 years. They started some
years before my birth.
On the east of the
Island (Puerto Rico), there is another club,
Rio Grande Unicycling Club. It is
about an hour away from home.
It is not as big as that of Isabela
but there are very good Unicyclists
over there. I have been involved in several
clubs closer to home. In
1988, we created a nice club
in my Neighbourhood. The club no longer exists
but there is another group of
unicyclists who find themselves time
in time. Recently, I make
road to Isabela (West) or Rio
Great (Eastern) about once a
week for me went
ner with other
unicycling.


Can you elaborate on
history unicycle in Puerto Rico
particularly on the foundation of this
club Isabela?
JR: This club was created by Francisco
(Paco) Dumeng. Paco saw a Dumeng
unicycle for sale at an chutes
attic, he bought it and taught
how to roll her son Wilfredo
Dumeng. His youngest son, Daniel
Dumeng, became the first
Puerto Rican rider level
world. Daniel is still part of
our national team. It rolls time
in time. Paco is a former Dumeng
boxer who is very charismatique and which
always organized many activities
for kids. Shortly after
his children learned to ride, he
taught other children in the neighborhood.
Here's how began the Club
unicycle Isabela, the first club
unicycle Puerto Rico. A kids
who also participated in the birth of this
Charles Perez club that is still
now the team captain
Puerto Rican basketball.
Puerto Rico is especially known
for his titles in (unicycling) basketball.


We would like to know more about the history
Puerto Rican basketball mono.
JR: Basketball, here are
t very popular. The
Most players of our team
were very good basketball players
before becoming unicycling. This
was not my case. I have learned to play
very recently.
And what are the major players
Puerto Rican?
We have many excellent
players and we try to stress
team game. The best players are
Jose Roman Hernandez and Anthony. They
could not get to last Unicon,
when we got there some
of our best games. Among the very
good still active players, there Josue
Barreto, our most active rider
now ... Allen (Lenny) Garcia, the
grand-son of Paco Dumeng, is a very
good marker. Charles Perez is our
captain. At 49, he plays
better than ever, he
has a lot of leadership
the field and he knows
the techniques. Esteban
present as one of our
top prospects. Jacinto
Anduce (Ayuso), our best
rider of all
Trial field, is also a
very good basketball player.
Alfredo Martinez, mono-
very fast, is cycling
also very strong in the
basket. Carlos Medina
very involved ... And there are still
many others.

The Puerto Rican team, always won the
Unicons Championships in basketball?
JR: We won the Unicons (championships) 1, 2, 3,
4, 5, 6, 10, 11 and 12. We got
second place (silver medal) in Unicon 7 (Minnesota).
Our team was not complete, and we faced a very good team:
Quebec, that won that year.
We have not participated in the Unicon 8 and 9.
We hope to win the Unicon 13. Our
players are well prepared but we
are not sure of the number of players
who can participate
. I think it will be the toughest competition so far. There are 45 teams listed, including Switzerland, Semcycle (Holland), France and Puerto Rico .

And you, how are you situated in this
team?
JR: I usually play as a pivot
or winger. My size
(About 1.80 m)
helps me to catch a lot of rebounds.
Being more than a rider
basketball player, I look
against the attacks.
As I'm fast, I can
help stop attacks against the
other teams. I do not think I am
impressive in my game but I'm
consistent.

For how long have you belonged to
National team participating in
Unicons?
Before, I did not like the mono-basket, I
was focusing on individual disciplines.
That's when Unicon 5
I played for the first time
the team. I was 6th
player and my role
was to add speed to the game. Before
last Unicon (in Japan), I
began to do visualizations
and my
game improved. I
really enjoyed. I decided to go to
Unicon in the last minute.
We did not had enough time to
practice together and we did not had
many players (only 4). I started
to meditate on the style of player I
wanted to be and it worked. Before
shooter, I visualize the ball going in
basket. I discovered that in most sports,
concentration is more important than fitness.
During this Unicon (Japan 2004)
we had one of the best teams
we had never had. There was a chemistry between us that we
always knew where the other players are located, we do not need
to watch. We said that we
could win without doing much
efforts; and that's what we did.

What are your future objectives as a
unicyclist?
JR: Now I am a healer (alternative medicine) and a therapist.
I want unicycling to help me get people's attention.
As a World Champion
Unicyclist, it is easier to get the attention
from the media and be
heard (by the people).
I would also like to make
money through what I can do in
unicycle and travel around the
world.


Why is unicycling so special for you?
JR: It's hard to describe how
I feel. When I am on
my unicycle, I feel like
regain my essence, I feel
particularly unique and I am sure of myself (confident).
We are all different but
we tend to pretend we are like the others. When I
roll (unicycle), I'm so sure of myself that I
can be myself. I really like
to spend time with others
unicyclists because they are great people.
I also like to try
different disciplines such as mono-basket
mono, the All Terrain, freestyle,
speed (races), giraffe (tall unicycles), long distance, etc.
There is always something new to
try on a unicycle.